How to integrate burpees into your firefighter workout

Burpees work the arms, back, abs, hamstrings and chest while also giving you a great cardio workout

The first 90 days: Why firefighters leave and how to keep them

The federal budget includes increased funding for AFG, SAFER and VFA, plus resources for the National Firefighter Registry and more

Hand gesture made by Maine FF in photo was due to injury, fire chief says

Rutland Fire Chief James Larsen, who had previously resigned as fire chief of Farmington in Minnesota, is accused of creating a hostile work environment

Two police officers were fatally shot; the Honolulu Fire Department is battling the blaze that spread to two neighboring houses 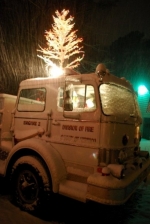